I looked at the spiral bound notebook sitting open on her desk and read the words she had written for her eyes alone to see.  I recognized and resonated with each statement she had written and circled, as if each one held its own place of prominence in her mind. Yet as I looked at her, I knew we were different. I couldn’t put my finger on it until years later. Was it that I was cooler? No way, I shuffled the halls of high school feeling like the misfit I still am. I was not cool enough for the popular kids nor nerdy enough for the smart kids. This of course left me with few alternatives. I could remain a misfit through high school, quit school altogether or hang out with the other misfits on the fringe. Actually I did all three, but that is a story for another day.

Before I share with you what I recognize as the difference between us, I will tell you some of the things, as best I can recall, that stared up at me from that sheet before my fifteen year old eyes.

Each statement, was written in dark ink, surrounded by matching inky circle :

I can’t do anything right.”

These were only a few of the kinder ones I can recall. I bet I don’t have to continue because you can fill in the blanks of your own “I’m a loser” page, or at least perhaps you could at some time in your life. I remember being aware of  two things as I saw that paper, which she quickly tried to cover once she realized my close proximity and view. First I recognized the accusing, mean girl voice on the paper. It was as if she had heard the voice in my head. But there we were worlds apart, she was not on the fringe but one of those kids outside the fringe. Understand, I was with the fringe group, commonly known as “those kids”…the ones who get detention, suspension and struggle with attention. Each group had its own sense of pride. If you were not part of the group…even the misfits, well then you were worse off. I could write a book on the psychological ramifications of High School but let’s just say I’d rather let sleeping dogs lie, or better still just die quietly in their sleep.

My fifteen year old heart-felt an ache to reach out to her and somehow encourage or comfort her, yet my adolescent mind was still not exactly outwardly empathetic. My response was a bit cooler- as in Frigidaire.

I’ve always regretted this moment in my life. Her face is etched in my memory, as is that day. If I could change one moment in time as ludicrous as it might seem in light of a lifetime, it would be to steal back in time and tell her all the things I know now, thirty-five years later.

I did not want to identify with her then , naturally, because I did not want to be less than a misfit myself. I clung to the fringe I barely belonged to, ironically. After all, I was getting good at being bad. I knew my place.  In high school semantics, that’s key to day to day survival. I may have been low on the totem pole but I was one notch higher than she. Amazing how pride knows no limits, high school or not.

The fact is I was only a better hider. I heard the same mean voice, and sometimes succumbed to the lies…I confess I sometimes still do. We all have moments of weakness, temptation and struggle. This is part of our human experience. To live victoriously does not mean to never have a moment of doubt, failure, forgetfulness…even faithlessness. What use is there for grace for those who have no need of it?

Every time I step out into unfamiliar territory, or take a leap of faith, the voice comes back to remind me of my past failures, my inconsistencies, my inability and  imperfection.

Before I accepted Christ and took Him at His word, I was powerless and battled darkness and depression without strength. However even with Him, there are times I struggle. I want to be clear about this, because there are certain other voices within the Christian community which will take issue with this point. To live an authentic Christian life is not to walk without failure, but to press on because the One who has the Last Word never fails. Christ continues even in my lapses, my momentary failures. See, the victory and victorious life is not about my failing to live up to some pious life, but in His continuing to keep me despite my failures.

I am telling you this, because I want to make sure that like that girl who sat behind me in class with her notebook open to a page full of lies spilled out from her head, YOU know this-YOU ARE NOT ALONE! You are not the only one struggling, failing or limping through this Christian life that you thought would be …a little less painful than it is.

God sees you trying, and crying and He does not condemn you for what you lack, but longs to pull you close, speak truth to your heart and encourage you with His love. I want you to know this, because His Grace and Truth brings life and peace…and rest for your soul, answers to your questions.

I want you to know that when the voice in your head is a liar, Jesus can and will deal with it. But, in the meantime trust this, friends You are not alone in this battle. When we are weak, He is strong…those aren’t just words. Those are facts.

One of my favorite passages for dealing with the liar in my head is 1 Corinthians 10:4-5 The weapons we fight with are not the weapons of the world. On the contrary, they have divine power to demolish strongholds. We demolish arguments and every pretension that sets itself up against the knowledge of God, and we take captive every thought to make it obedient to Christ.

*This post is part of a series: Devotion Thoughts for Summer Days– a combination of faith-based posts published between 2011-2013 (and some written fresh this Summer) revised with journaling prompts.

Thank you for joining me on the journey! 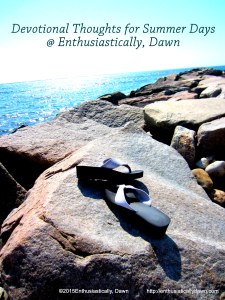 Linking with Create with Joy, Tell Me a True Story, Missional Women and the newest link up Weekend Whispers @ My Freshly Brewed Life.