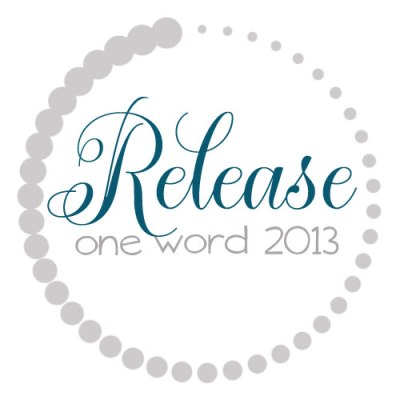 So I have to confess again, that when I began to consider the One Word challenge for 2013, I found myself faced with a word I really would not choose. Whereas with the word “Less” from last year I admit I would not choose it but could see immediately the wisdom and also a verse came to my mind clearly (John 3:30).

This time I was driving my car and chatting with Jesus (please tell me I am not the only one who talks to God in the shower and while driving) and sharing with Him how I could see that Less could be my word for two years because it really is ongoing…this business of Him being greater and me being less. Instead He seemed to impress upon me that He had a different word and it was Release. Now I know He is my Lord. He is God. But me being mortal (even with immortality seed within) turned to that invisible but present passenger and with my best “your will not mine” attitude (which is not hidden to him by the way) thought to myself, “Um no”, and said nothing. I felt the Him, impress upon me, it was His will and word. Someday I know He will speak and I will say “Yes, Lord”. It is my heart’s desire. Yet, I still am mostly a kicking and screaming kind of disciple. I still in the deep areas of my inner most being resist Him. But I am also still willing. And He takes that willingness and molds it. So here we go again. I know there is wisdom in His choice. I surrender the many words I would choose that are swimming around my head and I lean and trust on the One who really is trustworthy and knows best.

I currently have no verse that comes to mind. Does one pop into your head for me? But instead of playing Bible  roulette, as I sought to write this post, I went to the dictionary, my second favorite book and hoped for enlightenment.

Below as appeared in The Free Online Dictionary I was immediately humbled. I am not sure what is ahead for me, but only know God has something good in it. For 2013 God has revealed to me my One Word will be Release. I surrender my will to His and say…Bring It!

re·lease  (r-ls)
tr.v. re·leased, re·leas·ing, re·leas·es
1. To set free from confinement, restraint, or bondage: released the prisoners.
2. To free from something that binds, fastens, or holds back; let go: released the balloons; released a flood of       questions.
3. To dismiss, as from a job.
4. To relieve of debt or obligation.
5. To relieve of care and suffering.
6.
a. To issue for performance, sale, publication, or distribution.
b. To make known or available.
7. To relinquish (a right or claim).
n.
1. A deliverance or liberation, as from confinement, restraint, or suffering.
2. An authoritative discharge, as from an obligation or from prison.
3. An unfastening or letting go of something caught or held fast.
4. A device or catch for locking or releasing a mechanism.
5.
a. The act or an instance of issuing something for publication, use, or distribution.
b. Something thus released: a new release of a software program.
c. The condition of being available, in use, or in publication: a movie in wide release.
6. Law
a. Relinquishment to another of a right, title, or claim.
b. The document authorizing such relinquishment.
7. Linguistics The movement of a vocal organ or organs so as to end the closure of a stop consonant.

Today I am consecrating my planning calendar!
If you missed that wonderful guest post by Kim Jackson, please see this post:
Calendar Consecration!
Happy New Year, Friends!
May your One Word be His good and perfect word for you this year and may it lead you closer to His good and perfect will for your life while He is glorified and magnified! Amen!
A special thank you to Bonnie @ Faith Barista, Alece @ One Word 365, and Melanie @ Only A Breath who make this Bloggy World a whole lot smaller in a really BIG, wonderful way! Thank you, Ladies!
Aiming to link at these places:

On, In and Around Mondays,
Create With Joy,
A Holy Experience,
The Better Mom,
lowercase letters,
Mommy Moments Blog Hop